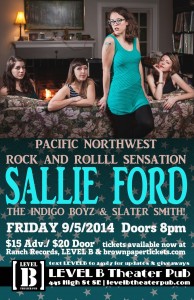 SALLIE FORD with guests The Indigo Boyz & Slater Smith at LEVEL B Theater Pub!FRIDAY, SEPTEMBER 5thDoors@8PM, Music@9PM$15 in advance at LEVEL B, Ranch Records or brownpapertickets.com / $20 at the door
text LEVELB to 24587 for updates & giveaways!

SALLIE FORD is the real deal. With a voice that can belt, soothe, caress, and flat-out spit sass, attitude, and raw street emotion, she sounds like some sort of dream cross between Ella Fitzgerald and Janis Joplin, and her band has evolved from the swing rock of the group’s debut full-length, 2011’s Dirty Radio, into a solid garage rock outfit that snarls, prowls, and shouts right along with her. Ford, who, on songs like the raging and rocking “They Told Me,” the stubborn and insistent “Party Kids,” the jazzy ballad “Shivers,” and “Devil,” which is full of bad-girl swagger and rockabilly strut, she shakes off her influences and becomes a force all on her own. She is a rare talent, a full-tilt arrival.
https://www.facebook.com/salliefordmusic

THE INDIGO BOYZ is a B-side cover and originals band playing bluesy-rock-folk and country-swing with a touch of alternative… resulting from one man’s musical vision combined with another man’s neurotic need to stay busy, then finessed by the talented work of others. The band’s style has quickly become a favorite of small cocktail venues, weddings, animal birthday parties, bat/bar mitzvahs and smoker’s lounges. With exception to the residents of a yellow jacket nest that found the keyboardist abrasive and confrontational, reviews have been quite positive.https://www.facebook.com/theindigoboyz

The core songwriter and creative center of The Weather Machine is SLATER SMITH. Garnering accolades for his music video project documenting his travel to every Oregon State Park, Slater’s songs carry an amazing message thats both playful and contemplative. Folk rock and indie influence are on the menu September 5th as Slater performs a very rare and special solo set for Salem!https://www.facebook.com/weathermachinemusic

Newly formed super group, PEPPERBOX made up of Todd McPherson, Rod Steward, J Saucy, and Casey Nova join the new and improved incarnation of local legend and Oregon musician’s Hall of Fame inductee Eric Lovre’s band for a night of rock and roll at LEVEL B!Guitarist for the legendary Dharma Bums, Eric has been rocking the Northwest since before you moved here! Eric is a fourth-generation Oregonian, born and raised in the Willamette Valley. As a boy, Eric used to build crazy things out of parts from his grandpa’s garage: crystal radios, little one-stage tube amplifiers, and even an eavesdropping device so he could listen to people in the living room while he was in the bedroom.Eric’s interest in music started around the same time. “I just love to play music. I can’t live without it. It’s like air and water to me. I was born to do it. It was a calling. My entire life, I never figured I would do anything else, ever. I never ever considered doing anything but rock and roll. That and electronics.”He also records music in his all-vintage-analog studio, producing and engineering projects for, among others, John Fahey, the Minus 5, Perhapst, Kalaloch, and Michael Davis (MC5), as well as his current group, the Eric Lovre Band. “I’ve never liked the sound of digital very much, although it’s improved over the years,” says Eric. “The energy and the whole vibe of the record is better when people give a performance. That’s what separates a great record from an OK record—a great human performance—because no technology can do that. Technology just does what you tell it to do.”Eric will present new material with the new lineup of his band who are preparing to release an album at LEVEL B in October!https://myspace.com/ericlovre/music/songspep·per·box [pep-er-boks]noun1. a compact, easily-concealed, but lethally persuasive revolver, favored by riverboat gamblers in the 19th century.2. an audibly dangerous 4-piece original rock powerhouse from the western United States, pairing industry-renowned singer/songwriters J. Saucy (vocals) and Casey Nova (guitar), with internationally-acclaimed virtuosos Todd McPherson (bass guitar) and Rod Steward (all manner of things beaten). Unpredictable, unrestrained and unorthodox, their music shifts effortlessly between the soft gooey center and the savage outer reaches of their genre’s sphere of extremes–at times coming on coy and insinuating, wearing all of the greasy fingerprints of the most succulent 1966 garage rock cut and then, just when the listener surrenders to the familiar pull of the warm hypnotic undertow, the plot twists and the sky splits wide open to reveal the glistening silhouette of a brave new sonic universe. And as if gasping aural ecstasy isn’t quite enough, their jaw-dropping, relentlessly-arresting, emotive performances are absolutely unrivaled in the music industry to date. From the first lush syllable of their thick dreamy vows of fealty to the final trailing note of their blistering rock anthems, they are clearly possessed by an insatiable passion and innate ability to enthrall and delight every last body in the building. Pepperbox plans worldwide tours in the near future, but in the meantime, they’re in Oregon, and are a must-see live show. https://www.youtube.com/watch?v=fG3-EOnGN48&feature=youtu.be